There are a few reasons why church planting networks should be thinking about the year 2050. But among the most important is that the population in North America—the United States in particular—is diversifying rapidly. Very soon, for the first time since the country’s founding, whites will comprise less than half of the total U.S. population. The nation’s leading demographer from the Brookings Institute, William Frey, says this could happen as soon as 2045.

While demographics aren’t destiny, the large shifts—especially the new complex dynamics of urban and suburban contexts—and the increasing diversity of local neighborhoods and communities has a huge implication for how church planting is being conceptualized for a new generation.

While demographics aren’t destiny, the increasing diversity of local neighborhoods and communities has a huge implication for how church planting is being conceptualized for a new generation. — @koobxwm Click To Tweet

Frey’s book, Diversity Explosion: How New Racial Demographics are Remaking America, provides watershed insight and implications for organizations concerned with how they can embrace and adjust to this oncoming reality,

I am convinced that the United States is in the midst of a pivotal period ushering in extraordinary shifts in the nation’s racial demographic makeup. If planned for properly, these demographic changes will allow the country to face the future with growth and vitality as it reinvents the classic American melting pot for a new era.

In 1980 Rick Warren launched Saddleback Church in Southern California. He would go on to lead one of the country’s most innovative churches in reaching the unchurched and dechurched people of his community, modeling for others how to launch churches that pivoted their worship gatherings and culture towards the spiritual seeker.

In that era, they discovered that not only can these innovations help grow a local church, but they could help stave off the steep membership decline mainline Protestant churches were experiencing, possibly due to their lack of innovation.

Warren and other church planting leaders discovered ways to start and lead churches that were effective in reaching the people of their time. And for the most part, over the last 40 years, most of our American church planting efforts have modeled themselves after the discoveries made in this era.

In 2021, we are closer to the realities of 2050 than we are to the conditions of 1980 when Rick Warren launched Saddleback Church. — @koobxwm Click To Tweet

However, in 2021, we are closer to the realities of 2050 than we are to the conditions of 1980. And while we are extremely thankful and should rightfully honor the creativity and faithfulness of church planting innovators over the last several decades, we’re at a point now where an honest examination of our existing models and systems should be made in light of the fast-changing culture and demographics.

There are four emerging trends in church planting that have developed in recent years that either have built on the prevailing models or have helped us better understand what efficiency and effectiveness looks like as we think about the future.

While much of the early multiethnic language derived from the perspective of majority white churches reaching non-whites, there’s now a tipping point where majority non-white churches are having to ask questions of how to reach whites and minority groups in their community.

Second- and third-generation immigrant church planters are grappling with how to start and lead churches that don’t underappreciate their ethnic heritage but at the same time can effectively reach the majority culture around them.

In its 2020 annual report, the Southern Baptist Convention reported that nearly 20% of its churches are now non-Anglo. More than 60% of its newest churches were non-Anglo. — @koobxwm Click To Tweet

In its 2020 annual report, the Southern Baptist Convention (SBC) reported that nearly 20% of its churches are now non-Anglo. More than 60% of its newest churches — many led by Send Network church planters — were non-Anglo.[1] This includes language-specific churches, but also non-Anglo church planters planting multi-ethnic churches. While the SBC is still largely white in its total membership, its church planting efforts among immigrant and minority groups play a significant factor in new growth.

These micro-networks have allowed churches of all sizes and ages to participate together in church planting in more meaningful ways than if left to their own. It has also allowed churches from different traditions and backgrounds to collaborate on how to better reach a city and how to plant churches together among hard-to-reach communities.

Similarly, there has been a maturation and iteration of models for how to do church in smaller settings. Some of the older prevailing models for microchurch used to be house churches or small, disparate and disconnected groups. Because of the lack of sustainability in these previous models, we’re seeing emerge more mature networks of smaller churches belonging within a corporate infrastructure that supports decentralization without losing the benefits of a larger structure.

These networks are finding ways to reach a variety of different focus groups through their smaller expressions while still being able to provide ministry and programs that more traditional churches have.

As indicated before, much of church planting over the last 40 years was focused on training church planters on how to start seeker-friendly corporate worship gatherings in communities that were underserved by existing churches. This style of a church plant tended to grow rapidly as it reached a community within a very similar demographic. It identified the cultural barriers that kept a group from attending church and created worship gatherings and ministry that avoided or reduced those barriers.

While this model—sometimes referred to as the launch model because church worship services are “launched”—continues to be the predominant North American model, many church planting leaders have indicated that the methods of launch don’t have the same traction as decades ago.

Rather than a pure launch-style model, church planters are recognizing the need to have a missionary presence in the community before launching a gathering. This often involves learning how to do community engagement and development. This is especially important for cities like Houston, Toronto, Miami, and others with communities with a large number of new non-Christian immigrants.

The focus of the church planter often becomes less about how to gather as many people as quickly as possible to how to be a gospel witness that is meaningfully engaged and making disciples within a hard-to-reach community. —… Click To Tweet

The focus of the church planter often becomes less about how to gather as many people as quickly as possible to how to be a gospel witness that is meaningfully engaged and making disciples within a hard-to-reach community.

Refocusing Our Metrics in Church Planting

Lastly, there is a shift in how denominations and networks are thinking about the long-term strategy of church planting. Rather than mainly focusing on trying to find already-made church planters, church planting groups are also paying attention to how to develop everyday Christians to have a heart for reaching people and the practical skills of disciple-making and gathering.

There is a long-term investment in developing church planting pipelines from among local churches. This comes from the realization that the church planting boom of the late 1990s and early 2000s came from a large swath of youth pastors and seminarians who were almost ready-made church planters. But focusing on a small pool of people means relying on a limited group of qualified professionals.

Rather than merely tracking lag measures—the quantifiable results of church planting—there is a rightful interest in better defining lead measures, which are tracking the vision and interest of local churches in church planting, creating a culture change that is necessary to include as many people as possible in church planting for the future.

The Great Need of 2050 and Net Gain Churches

As of the last official U.S. census, the church-to-population ratio in 2010 was nearly 1:1000 or one church to every thousand people. The projected U.S. population with basic growth by 2050 will be nearly 390 million people.

On average, Christians need to net gain nearly 2,000 churches per year between now and 2050 just to keep the same church-to-population ratio we have today. Click To Tweet

While this is only a model and one way of looking at our current church planting capacity, there is an overwhelming sense that we need to increase church planting activity through innovation. And although demographics aren’t destiny, it is one crucial component for how church planting groups need to re-evaluate their church planting strategies for the future.

Our best practices of yesterday have gotten us to today, but we need greater creativity and faithfulness to meet the urgency of tomorrow.

To see how Southern Baptists have cooperated to plant churches over the last decade and are planting with the future in mind via the largest church planting network in North America — Send Network — visit TheGospelUnites.com.

Daniel is the Director of the Send Institute, a partnership between the North American Mission Board and the Billy Graham Center at Wheaton College. Prior to directing the institute, he planted a church in Toronto. He earned an M.Div. from Southwestern Baptist Theological Seminary, a B.S. in Computer Science from the University of Michigan, and is currently a Ph.D. Intercultural Studies student at Trinity Evangelical Divinity School. 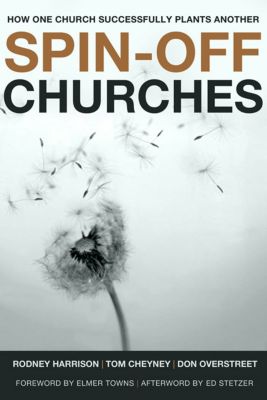 Spin-Off Churches: How One Church Successfully Plants Another