The Church of Eleven22 didn’t plan on having a worship service on a different day, but they were meeting in another church’s building at the time and outgrew all of their Sunday morning options.

“Because of other things happening at the church at the time, Thursday night was the only option available,” said Joby Martin, lead pastor of the Jacksonville, Florida-area church. “It was an accident, but God breathed on it like crazy.”

Having worship services at other times may provide opportunities for growth for other congregations, as 1 in 4 U.S. Protestant churchgoers with a job say they have to work on Sunday mornings at least once a month, according to Lifeway Research.

1 in 4 U.S. Protestant churchgoers with a job say they have to work on Sunday mornings at least once a month. Click To Tweet

“When a local body of believers cannot all meet together, it is missing out on its purpose,” said Scott McConnell, executive director of Lifeway Research. “While a traditional Sunday morning meeting time works for most, it isn’t possible for all to attend.”

The study from the Nashville-based evangelical research firm found most churchgoers aren’t faced with a job preventing them from gathering with their church on Sunday mornings. Two in 5 (41%) say their job never requires them to work on Sunday, and another 36% say they do not have a job.

Still, 23% of Protestant churchgoers at least occasionally are forced to miss Sunday morning services because of their job, including 5% who have to work that time each week, 6% twice a month or more, 4% once a month, 5% a few times a year, and 2% once a year or less.

23% of Protestant churchgoers at least occasionally are forced to miss Sunday morning services because of their job. Click To Tweet

Among churchgoers who have a job, 64% never have to work on Sunday mornings, yet more than a third (36%) are required to at least occasionally clock in during those hours. For 8%, their job requires them to work every Sunday morning. Another 10% work at that time twice a month or more, 7% say once a month, 7% a few times a year, and 4% once a year or less.

Particular demographic groups are more likely to be working during the traditional time for a church worship service, including many that churches are struggling to reach.

Among 18- to 35-year-old employed churchgoers, 42% say their job requires them to work at least one Sunday morning a month. Click To Tweet

African American (32%) and Hispanic (31%) employed churchgoers are more likely to say they have to work at least once a month on Sunday morning than white churchgoers with a job (20%).

Those who attend smaller churches are more likely to work occasionally on Sunday mornings. Click To Tweet

A 2018 Lifeway Research study found 56% of U.S. Protestant churchgoers believe the biblical command to take a day of Sabbath rest each week still applies today. In a typical week, 70% say they take that rest day on Sunday, with 23% saying they don’t take such a day and few pointing to any other day.

The mix among Sunday morning workers of highly religious demographic groups with some of those who are the most unchurched provides congregations with a compelling opportunity to offer something beyond the traditional service times, as Martin and the Church of Eleven22 discovered.

Forced to start a service on a different day, Martin settled on Thursday as the only possible day. “We did not want to do Saturday because at that point I had a young family, and they would end up despising a Saturday service because we would never get a day with family.”

In addition to their non-traditional worship service times, Martin said the church offers services live online and on-demand. They also have discipleship groups that take place throughout the week, all with an eye to those who may not have open Sunday mornings. He said other churches could do the same.

The congregation didn’t offer any resistance to the idea of offering worship services at different times. “Our people are very excited to open more opportunities for more people to hear the gospel,” he said.

As a pastor who is obviously working on Sunday, Martin said he still tries to take a day of rest. “I don’t do it very well, but I try to rest and refuel on Fridays,” he said. In a 2015 Lifeway Research study, 85% of pastors at evangelical and historically Black Protestant churches say they unplug from their ministerial duties at least one day a week.

85% of pastors at evangelical churches and historically Black Protestant churches say they unplug from their ministerial duties at least one day a week. Click To Tweet

For those non-pastors who work on Sunday and aren’t at a church that offers different service times, Martin said they could use technology to listen to worship music and a sermon to have an extended time with God as an alternative, but “it doesn’t take the place of corporate worship.”

He said some may be able to take a day of rest on a day they meet with their small group Bible study. They could also “visit a church that does meet when it’s conducive for you to meet.” For those with other employment options, Martin said looking for a job that doesn’t require regular Sunday morning working hours could be a simple solution.

The online survey of 1,002 American Protestant churchgoers was conducted September 20-27, 2019 using a national pre-recruited panel. Respondents were screened to include those who identified as Protestant/non-denominational and attend religious services at least once a month. Quotas and slight weights were used to balance gender, age, region, ethnicity, and education to more accurately reflect the population. The completed sample is 1,002 surveys. The sample provides 95% confidence that the sampling error from the panel does not exceed plus or minus 3.2%. Margins of error are higher in sub-groups. 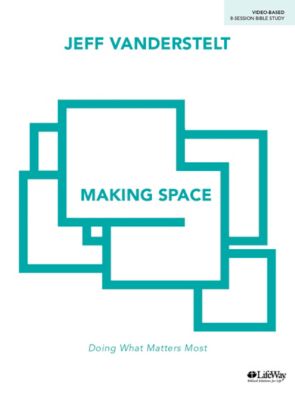 Making Space: Doing What Matters Most