Recently my brother-in-law was in charge of getting the cake for his mom’s retirement party. The family was surprised when they saw the cake’s short message: “Quitter”

Having worked a couple years beyond her standard retirement age in the U.S., few would consider her a quitter in the normal, judgmental use of the word. But, the morsel of truth that she was walking away from her job, made the cake humorous for at least some of those present.

In the same way the cake was not immediately appreciated by his mom, talk of pastors quitting today is often not appreciated by other pastors. A pastor shouldn’t have to walk away from their job at a church for others to realize their job is hard.

A pastor shouldn’t have to walk away from their job at a church for others to realize their job is hard. — @smcconn Click To Tweet

When Michigan State Professor of Organizational Psychology, Rick DeShon, first studied the work of pastors, he agreed with earlier findings from Kuhne and Donaldson that “the pastor’s work activities are highly varied, taxing, fast-paced, unrelenting, and often fragmented.”

DeShon was no newcomer to analyzing jobs. This is his area of research expertise having analyzed the observable characteristics of countless jobs in diverse types of work. He concluded, “the breadth of tasks performed by local church pastors coupled with the rapid switching between task clusters and roles that appears prevalent in this position is unique. I have never encountered such a fast-paced job with such varied and impactful responsibilities.”

Consider for a moment the fact that almost every task a pastor has is by nature complex: studying for a sermon, giving marital advice, providing leadership to a volunteer organization, having budget responsibility, helping those who are grieving, etc. That diverse complexity alone is taxing.

But the demands on a pastor require them to quickly switch between different complex tasks that require completely different knowledge, skills, or abilities. Matt Bloom is Associate Professor at the University of Notre Dame where he leads the Wellbeing at Work Program. He describes the toll that this takes on a pastor. The switching, “is costly in terms of cognitive effort, behavioral control, and emotion regulation.”

And this list of tasks for a pastor never ends. There is always another complex task to switch to and to pour your all into.

A congregation’s needs, demands, and desires seem never-ending and are often ill-timed. Yet, few pastors quit.

Lifeway Research found about 1% of pastors leave the pastorate prior to retirement each year. Click To Tweet

Lifeway Research found about 1% of pastors leave the pastorate prior to retirement each year. To get this estimate, we surveyed 1,500 pastors. Each was asked who pastored their church 10 years ago and where was that pastor today—2% had left the ministry completely and 5% served in a role other than pastor in ministry. Among churches that existed and had a pastor 10 years ago, 13% are estimated to have left the pastorate for reasons other than death or retirement This is less than 250 a month.

Because information flows so quickly today, it is easy to string together a handful of crowd-sourced stories of pastors quitting and to assume you have a new trend or a new epidemic in the American church. In reality, even a list of 100 pastors is still a fraction of the normal range of pastors changing career direction in a typical month.

Even a list of 100 pastors is still a fraction of the normal range of pastors changing career direction in a typical month and is still a very small percentage overall. Click To Tweet

Why would pastors quit?

The same survey that identified a previous pastor of their church who quit also obtained the reasons. The largest group had a change in calling (37%) as evidenced by most of them still serving in ministry somewhere, though not as a lead pastor.

Two other common reasons are tied to the pastor’s interaction with their church: 26% left because of conflict in the church and 13% because they were a poor fit for that church.

Considering the nature of the job, you would expect burnout to be at the top of the list. But there are ways pastors can prevent burnout and refill their tank.

Why are we hearing about quitting now?

Two topics that have been the focus of much attention in America recently have been the impact of COVID-19 and political conflict. The church has not been immune to either of these outside influences.

Throughout 2020 pastors described to Lifeway Research the rapid pace of change within their congregation triggered by the pandemic. Pastors were forced up a steep learning curve on new technology. Within weeks churches added online worship options and online giving options.

It seemed each week pastors received new information on what their church could/could not do, what was/was not safe, and where they could/could not go. The speed of these changes and the lack of reliable information at times made the already stressful job of being a pastor even more demoralizing.

When each believer uses their spiritual gifts, it not only benefits others in the church, it lightens the load of others, including the pastor. — @smcconn Click To Tweet

In many cases what has made continuing seem impossible is not the need for sacrifice, but the failure of other believers in the church to share the load they are called to carry. No pastor is called to do the work of a church alone. When each believer uses their spiritual gifts, it not only benefits others in the church, it lightens the load of others, including the pastor.

By July of 2020, pastors’ greatest pain point had become maintaining unity within their church. As their church navigated safety concerns, members of their congregation voiced differing opinions loudly, often reflecting the political leaders they listened to.

As the nation was fixated on politics and the pandemic, it is not surprising that people noticed and pointed others to any pastor who chose to walk away from one of these flashpoints.

The reality is that most pastors that reach an impossible point in their current church go on to serve another church. They don’t leave the pastorate. They shift to a congregation where they are a better fit or the conflict is not pointed at them. When we asked pastors the reasons they left their previous church, 54% say they took their last church as far as they could, 34% say their family needed a change, and 23% say there was conflict in the church.

In addition, 19% say the church did not embrace their approach to pastoring, 18% were reassigned, 18% were not a good fit for the church, 18% say the church had unrealistic expectations of them, and 8% were asked to leave their last church.

How do so many pastors not quit?

Most pastors believe God has specifically called them to the role of pastor. Until God gives them a different assignment, this assurance that they are where they are supposed to be provides a reason to dust themselves off and get up again when they find themselves knocked down.

One of the realities that research on the well-being of pastors has often failed to capture is that God uses difficult seasons. It is easy to paint a picture of well-being that reflects a single point in time. At this moment, the pace of change is more than I can handle. Right now, I can’t stand this conflict. Today, I don’t have what it takes. But most of us, if we had to choose, would trade some pain today if it led to genuine, long-term wellness.

One of the realities that research on the well-being of pastors has often failed to capture is that God uses difficult seasons. — @smcconn Click To Tweet

God’s promise to work all things together for the good of those who love Him and are called according to His purpose is not something we typically see immediately. It is often a refinement or a reshaping of us that occurs in a fire that brings new growth and renewal to our lives.

Ultimately pastors know they are not alone. As discouraging as today may seem, pastors have faith that God is present and cares for them personally. God often shows this care through others he places in the pastor’s life. Research has shown the value of the pastor’s spouse, time with family, and being able to share their struggles with a Bible study group in their church. All of these predict higher likelihood of a pastor staying in ministry.

Nobody celebrates when a pastor shows up to work on a Monday morning to serve their congregation another week. In the same way, nobody applauds when a custodian, or software programmer, or customer service rep arrives at work. It is their work. The reason we are surprised when a pastor doesn’t continue is because it is such a low percentage who actually quit. 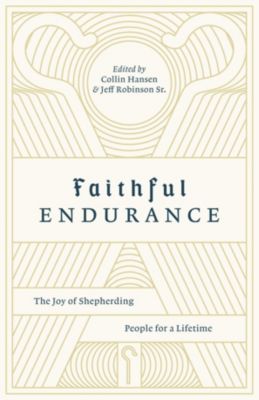 Faithful Endurance: The Joy of Shepherding People for a Lifetime