I was teaching a group of Ugandan seminary students online when the class coordinator asked me a question that I have often considered in an American context, but had not considered for Christian brothers and sisters in other countries––what about the Old Testament?

He expressed that Christians in Uganda often avoid it, and he wanted to know how he could explain its relevance to believers in his care. He asked me how he and his fellow ministers could foster interest and passion in their church members for reading the Old Testament.

Only a third of Protestant church attenders read the Bible every day, with 12% of respondents saying they rarely or never read the Bible, according to Lifeway Research. Click To Tweet

It is tragic that both pastors and lay Christians all over the world have often neglected a section which comprises three-fourths of the Bible. A 2019 Lifeway Research study found that only a third of Protestant church attenders read the Bible every day, with 12% of respondents saying they rarely or never read the Bible. In a 2016 Lifeway Research study, less than half of evangelicals said they had read the entire Bible at least once. As bad as these statistics are, it’s a safe assumption that the numbers would be significantly worse if we specifically asked respondents about their engagement with the Old Testament.

Why We Can’t Neglect the Old Testament

Better understanding of the New Testament

Why is our neglect of the Old Testament a bad thing? First, the Old Testament is the best commentary on the New Testament (and vice versa). You don’t understand the full significance of the Lord’s Supper, Jesus’ celebration of the Passover with His disciples just prior to His death, and the meaning of the title “Lamb of God” until you understand the rich background to these treasures in the Passover account in Exodus. You don’t understand Jesus’ role as the Davidic king who will reign forever until you understand God’s gracious promises to David in 2 Samuel 7. You don’t see as much splendor in God overcoming the language barrier at Pentecost if you miss how it undoes the effects of mankind’s sin at Babel.

Scripture is its own best commentary, and the unfolding of biblical truth from the Old Testament forward demonstrates the richness, depth, and beauty of the story God is writing in human history. — @matcrawford Click To Tweet

If you aren’t aware of the food regulations in the Mosaic law, you don’t grasp how massive a change it is when God tells Peter in Acts 10 to rise, kill, and eat––and how that points to the marvelous work God is doing among the Gentiles. And encountering the tree of life in Revelation means so much more when you see how it bookends Scripture––appearing first in the Garden of Eden in Genesis and then reappearing in God’s new heaven and new earth at the end of the Bible. Scripture is its own best commentary, and the unfolding of biblical truth from the Old Testament forward demonstrates the richness, depth, and beauty of the story God is writing in human history. We could go on and on with these examples.

Another reason we shouldn’t neglect the Old Testament is because people in our culture connect so well with stories. Often, we ask new people we meet to tell us their “story.” Companies today even hire “story architects” in order to get their product and messaging out to potential consumers. Jesus used stories––what Scripture calls parables––as a major aspect of His teaching. Surely this is an indication of their effectiveness. If we neglect reading, writing about, teaching from, and preaching the Old Testament, we will miss out on so many opportunities for personal connections to real-life saints who found God to be faithful.

If we neglect the Old Testament, we will miss out on so many opportunities for personal connections to real-life saints who found God to be faithful. — @matcrawford Click To Tweet

In fact, Paul tells us something very similar in Romans 15:4: “For whatever was written in the past was written for our instruction, so that we may have hope through endurance and through the encouragement from the Scriptures.” When Paul says “Scriptures” at this point in biblical history, he is primarily (and maybe exclusively) referring to the Old Testament––the “Bible” he had learned as a Jew.

Through the example of Old Testament saints, who didn’t know the name “Jesus” and weren’t aware of the cross but still looked ahead to God’s redemption in faith, we too can be blessed with the whole story as we look back in faith. Old Testament saints like Joseph, Moses, Deborah, David, Daniel, and Esther show us how to live with faith, obedience, courage, and wisdom in the midst of tempting and harrowing situations. Aren’t Old Testament saints the examples held up for us in the well-known “Hall of Faith” in Hebrews 11?

What We Can Do

How then can pastors and church leaders reverse the unfortunate trend of shying away from the Old Testament?

First, Christian leaders need to read it ourselves.

If we aren’t spending significant portions of our personal devotional time with the Lord in the Old Testament––including books other than Psalms and Proverbs––it’s going to be hard for us to engender passion for its truth in the hearts of those we lead. In your devotional time, read and benefit from different genres of Scripture. From time to time, pray over and choose some deep dives into Old Testament books. Through these efforts the Lord will enrich your own study, grow you in the knowledge of His Word, and strengthen your ability to disciple your people.

Second, preach and teach the Old Testament with joy and passion.

And not just Psalm 23 or 2 Chronicles 7:14 or Isaiah 9 (at Christmastime). Do an expository series through an Old Testament book, showing your hearers how that book advances God’s plan for His people, how it points ahead to Jesus, and how it demonstrates for us how to live the life of faith in our own context. In many cases church members have lived their whole lives in church and never heard those passages preached––it’s new and fresh for them, making them more attentive.

Finally, look for grace in the Old Testament.

When you open your eyes to grace, you recognize it is everywhere. One way to find those instances is to ask yourself, “Did God have to do this?” Apply that question to our very creation; He wasn’t lonely or in need of anything. He created us out of His lavish love and grace. Apply that question to His first promise of the gospel in Genesis 3:15: did God have to promise that one day the Seed of the woman would crush the head of the serpent, or could He have just ended the rebellious human race right then and there?

When you open your eyes to grace, it is everywhere in Scripture. One way to find those instances is to ask yourself, “Did God have to do this?” — @matcrawford Click To Tweet

Did God have to rescue Noah and his family? Did He have to call Abraham out of an idolatrous background into relationship with the Lord and then promise to bless all peoples of the earth through him? Apart from the promises that He had willingly chosen to make, was God somehow obligated to preserve the nation of Israel through many dangers and to use them to bring a Redeemer into the world? His grace, His unmerited favor, His kindness, and His mercy saturate the Old Testament.

And what about the Minor Prophets? Prophetic books get a bad rap because of the perception that they are all gloom and doom. But when you understand the nature of prophecies of judgment in the Old Testament, you can see God’s grace in every one of those passages. Prophecies of judgment carry with them the understanding––even if it is never stated––that if there is repentance in the face of the warning, God in His sovereignty may choose to either reduce the judgment, delay the judgment, or remove the judgment.

For example, in 1 Kings 21, Elijah is sent by the Lord to prophesy coming judgment on Ahab for his many sins. Elijah foretells that Ahab’s dynasty will end violently, with no mention of a chance for the situation to change. However, Ahab humbles himself, mourns, and fasts over his sin. The Lord sends Elijah back to Ahab to explain that the disaster will be delayed. It’s not that God changed His mind or had second thoughts; it’s that prophecy comes with the inherent understanding that human repentance opens the possibility of God changing the consequences. See Jonah’s very short sermon to Nineveh, their repentance, and God’s removal of the disaster for another powerful example of this principle at work.

For the good of your soul and those you lead, drink deeply from the Old Testament, and point people to the grace of God found in its pages. — @matcrawford Click To Tweet

The point is, the Minor Prophets are known for lots of judgment oracles, with some sprinkles of hope and grace. But I actually think the judgment oracles are examples of God’s grace, too! Why? Because they are calls to repentance––appeals which God is in no way obligated to make. Oracles of judgment flow from God’s mercy, as through them people are actually warned of God’s holiness and justice, their sin, and the approach of punishment. With those oracles comes also the possibility of God reducing, delaying, or removing the judgment.

Reading the Old Testament this way made the entire Bible come alive for me, and it made discipleship, teaching, and preaching even more enjoyable. For the good of your soul and those you lead, drink deeply from the Old Testament, and point people to the grace of God found in its pages.

Matt is the pastor of Trinity Baptist Church in Cordova, Tennessee. 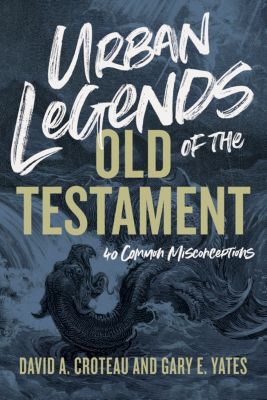 Urban Legends of the Old Testament