During a recent sermon, I ventured into turbulent waters—twice. I seemed determined to find something to upset one or two people.

Both of my views fall in the category of a “non-negotiable,” but for different reasons.

My choice not to consume alcohol is a personal decision, my own personal conviction. But the operative word is “personal.” I don’t drink, yet I have no qualms about those who do—so long as (1) they are not letting the alcohol take over in drunkenness, which is wrong according to Scripture (Eph. 5:18) and (2) they are not compromising their own convictions.

Of course, Scripture also condemns a lot of other actions. One of the most oft-quoted Scriptures condemning the act of homosexuality is Romans 1:26-27, and in the verses that immediately follow, other sins are also listed: envy, strife, gossip, and disobedience to parents.  And of course, the number one sin among Christians, which many don’t talk about: gluttony.

But let’s not make the sole focus of the Bible to be a list of things God is against. Let’s focus on what God is for: He is for us. He created us to live an incredible life with Him, and even when we rebelled, He took action through Jesus Christ to restore us back to that life. Any prohibitions are for our benefit. Do you want to enjoy life—I mean, really enjoy life? Follow these instructions.

Sin in the Church

So let’s get to the conversation my wife and I had on the way home after the sermon. Mary asked a valid question: What do we do when someone wants to join the church who is a homosexual?

• Is this a believer who struggles with the pull of with same-sex attraction?
• Is this a person who proudly identifies himself as gay and thinks the act of homosexuality is perfectly OK for a Christian?

Let’s consider the first person, but in the place of “homosexuality” insert any other sin: the pull of recreational drugs … pornography … anger … gluttony … a bitter spirit. We all struggle with sins and habits, and hopefully, we are gaining victory over those as we grow in Christ. And there are many believers who struggle with homosexuality. Do we push these struggling believers away?

I wouldn’t put such a person in a position of leadership, but neither would I ask someone to lead a small group who has a violent temper. However, I would encourage their participation with other Christians. The accountability and support of the body of Christ is a key factor for all of us to resist temptation, overcome sinful habits, and grow in our faith.

The accountability and support of the body of Christ is a key factor for all of us to resist temptation, overcome sinful habits, and grow in our faith. — @lynnpryor Click To Tweet

It’s a whole different issue with the person who believes his homosexual behavior is perfectly acceptable, and therefore, he will continue in it. Or the person who goes on a bender every Friday night but wants to be seen as a respected member of the church. We’re talking about continual sinful behavior with no reservations about it.

Paul had something to say about this:

“It is actually reported that there is sexual immorality among you, and the kind of sexual immorality that is not even tolerated among the Gentiles—​a man is sleeping with his father’s wife.  And you are arrogant! Shouldn’t you be filled with grief and remove from your congregation the one who did this?” (1 Cor. 5:1-2).

Paul’s choice of words shows this man and woman were living this lifestyle continually (and even worse, the church seemed to be OK with it). Paul’s response was to remove them from the fellowship of the church until repentance was evident.

When Sin Calls For Church Discipline

As Mary and I drove home, our conversation landed on the issue of church discipline.

• At what point do you tell a person he’s not welcome in the church, or he can no longer have a leadership role?

• What sins call for church discipline, and what sins do we give a pass to?

• Do we make a blanket rule about a particular sin, or do we make it a case-by-case matter?

These are hard questions to answer—which may help explain why most churches don’t deal with it. Lifeway Research surveyed Protestant pastors and discovered that over half of them (55%) had never seen church discipline carried out. Another 21% said it had been at least three years since the church engaged in church discipline. The optimist in me wants to believe this lack of church discipline means there was no need for it, but the realist in me looks around and acknowledges it’s an issue we’d rather not bring up.

Lifeway Research surveyed Protestant pastors and discovered that over half of them (55%) had never seen church discipline carried out. Click To Tweet

As pastors and church leaders, we need to consider how we will respond to culture’s unbiblical view of sin when it attempts to creep into the church. Three principles need to guide the process:

1. Stand your ground on biblical teaching.

Any stance the church takes on a moral or cultural issue must be based on Scripture, not on personal opinions or bias. Opinions can be fickle, and they can certainly be changed; God’s Word does not change.

2. Stand your ground in love.

We can be right yet oh-so-wrong in how we stand on the truth. Every action we take must be undergirded with love and grace. “Let your speech always be gracious, seasoned with salt, so that you may know how you should answer each person” (Col. 4:6). Peter also called us to speak with gentleness and reverence as we defend our beliefs and convictions (1 Pet. 3:15-16).

We can be right yet oh-so-wrong in how we stand on the truth. Every action we take must be undergirded with love and grace. — @lynnpryor Click To Tweet

3. Discipline with the goal of being redemptive.

Seek to bring the person away from sin and into a life lived under the lordship of Christ. As Paul confronted the church with the need to discipline an immoral believer, he later called the same church to restore the repentant believer to the fellowship (2 Cor. 2:5-8). Love calls for nothing less. Love confronts the sin, and love restores the repentant child of God.

Lynn leads the team that develops and produces MasterWork and Bible Studies for Life. He blogs regularly at LynnHPryor.com.

A version of this article originally appeared at lynnhpryor.com. 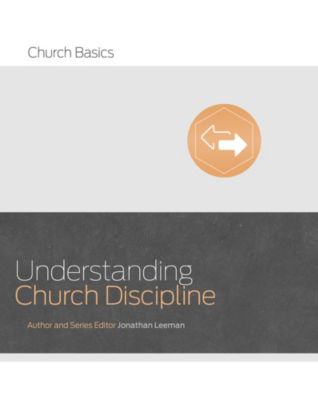