Pastors have numerous church responsibilities, but the one they say takes up the most of their work week is sermon preparation.

According to a 2008 Lifeway Research study, the average U.S. Protestant pastor spends almost 14 hours each week in preparation for their Sunday message.

The average U.S. Protestant pastor spends almost 14 hours each week in preparation for their Sunday message, according to a 2008 Lifeway Research study. Click To Tweet

The survey found 65% of pastors say they work 50 hours or more a week. This actually understates the number of hours involved in a typical pastor’s work week as almost one in six are bivocational, part-time, or volunteer and by design work less than 40 hours for their church each week.

It is also well above the time put into hospital, home, or witnessing visits (an average of 6.3 hours each week), personal devotions not related to preparing to teach (5.6 hours), meetings for church (4.8 hours), counseling others (4.7 hours), and handling email and other correspondence (4.5 hours).

In a 2012 Lifeway Research study specifically on Southern Baptist pastors, close to 7 in 10 say they spend at least eight hours a week on sermon preparation, with 21% saying they spend more than 15 hours. Three in four SBC pastors (75%) say they have sufficient time each week for sermon preparation.

Almost 7 in 10 Southern Baptist pastors say they spend at least eight hours a week on sermon preparation, according to a 2012 Lifeway Research study. Click To Tweet

How Far in Advance Does Sermon Prep Start?

When they are working on sermon preparation each week, most U.S. Protestant pastors are not trying to figure out the topic or Bible passage for this coming Sunday’s sermon. The majority of pastors say they have it planned out at least a month in advance, according to a 2016 Lifeway Research study.

Still, 22% of Protestant pastors say they only have their sermon topic planned out the week before, with another 13% having at least chosen the passage two to three weeks prior. For those with more extensive planning, 17% plan one month out, 22% say two to five months before, 9% say six to eight months, 6% say nine to 12 months, and 7% have the topic planned out more than a year before they deliver the message.

Most U.S. Protestant pastors say they have their sermon topic or Bible passage planned out at least a month in advance, according to a 2016 Lifeway Research study. Click To Tweet

Smaller church pastors are the most likely to not have the passage or topic chosen until the week before the sermon. Pastors of congregations with fewer than 100 (28%) are more likely than those with attendance of 100 to 249 (15%) and those with 250 or more (11%) to say they’re still planning their sermon’s general topic the week prior to delivery.

Other pastors who are more prone to work on the passage or topic the week before include African American pastors (38%), pastors without a college degree (37%), and pastors 65 and older (29%).

Large church pastors, those with worship attendance of 250 or more, are the most likely to say they plan their sermon topic nine to 12 months out (15%) but the least likely to say their planning stretches more than a year before they actually preach the sermon (2%).

Mainline pastors (13%) are three times as likely as evangelical pastors (4%) to plan sermon topics more than a year before. Denominationally, Lutherans (16%) and Presbyterian/Reformed pastors (10%) are more likely to have more than a year’s worth of planning in their sermon than Baptists (3%), Methodists (2%), Pentecostals (less than 1%), or Holiness pastors (less than 1%).

Additional education also usually leads to advance sermon planning, as those with a graduate degree (8%) are more likely than those without a college degree (1%) to plan their sermon topic or passage more than a year before they preach.

Many take the traditional route of sermon preparation—a pastor alone with a Bible and in prayer. Others, like church planter and pastor Jeremy Rose, use a group method that combines study of the text with discipleship.

At The Axis Church in Nashville, Tennessee, Rose and a group from the church who have all completed a basic hermeneutics course gather on Monday nights to discuss the passage for the next sermon. Each one has been studying the text for a week. Rose takes notes and asks questions during the discussion.

Rose then spends several hours Wednesday and Thursday studying before finishing his sermon. This method allows him to deliver a sermon with more than 60 hours of research behind it, while also spending time in God’s Word with men in his church.

“It helps keep me humble,” he says. “When someone compliments the sermon, I can honestly say, ‘I wish I’d have written it.’”

Rose is honest about his feelings toward sermon preparation. It’s one of his least favorite parts of ministry. “I enjoy preaching, I don’t enjoy studying.” Rose says. “But I hate preaching without studying.” 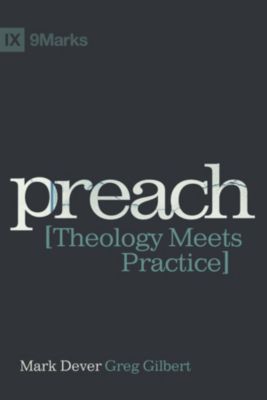